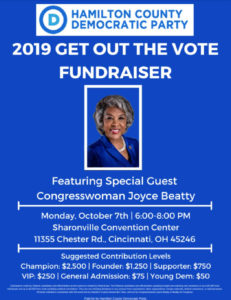 The Hamilton County Democratic Party is proud to announce our 2019 Get Out The Vote Fundraiser! To jumpstart our GOTV efforts when early vote starts on October 8th, the 2019 Fundraiser will be held on the evening of Monday, October 7th 2019!

We are excited to announce our Special Guest for the evening is Congresswoman Joyce Beatty! Congresswoman Beatty has served as US Representative of Ohio’s 3rd Congressional district since 2012. She previously served in the Ohio House of Representatives for 9 years, becoming the first female Democratic House Leader in the 127th General Assembly. She currently sits as Chair of the United States House Financial Services Subcommittee on Diversity and Inclusion and member of the United State Congress Joint Economic Committee. Congresswoman Beatty also serves as Vice-Chair of the Congressional Black Caucus.

Come get energized for our 2019 election season, hear from our 2019 HCDP Endorsed candidates from all around the county and learn more about opportunities to knock doors, make phones calls, and help us on election day!

10 VIP Tickets, mention during the ceremony, featured on signage/promotions, prominent place on the front of the event program

5 VIP tickets, 5 General Admission tickets, featured on signage/promotions, placement on the front of the event program

2 VIP tickets, 8 General Admission tickets, placement on the back of event program

Early Bird Discount will be available until Wednesday, September 19th at 5:00 PM

Location and final details to be announced soon!

Event will have cash bar and hors d’oeuvres/heavy appetizers.

Authorized and Paid for by the Hamilton County Democratic Party

Solicitations made by Federal candidates and officeholders at this event are limited by Federal law. The Federal candidates and officeholders speaking tonight are soliciting only donations of up to $2,800 from individuals and up to $5,000 from multi-candidate political committees. They are not soliciting donations in any amount from corporations, labor organizations, foreign nationals, federal contractors, or national banks. All funds solicited from this event are by the Hamilton County Democratic Party and not by Congresswoman Joyce Beatty or Beatty for Congress.